On Wednesday, 22 September 2021, at 19.30, I will introduce the Cineforum: European Cinema: The Failed Canon, which will take place in Cinema Kriterion in Amsterdam. Do you think ‘European cinema’ as an entity exists? We invite you to contemplate or contribute your perspectives on the (im)possibility of a European film canon. The cineforum will continue for two days on the 23rd and 24th of September, during which ten screenings will open the discussion to various themes concerning European culture.

The opening film will be La grande bouffe (Marco Ferreri, 1973). Booed in Cannes, censored in cinemas at the time, this film has by now become a cult classic of European cinema history. Central themes – haute cuisine, decadence, existentialism, and the grotesque – are strongly related to European traditions and history, while the plot of the film alludes to a European culture in decay. The focus is on a group of friends who decide to eat themselves to death. They do so in style, one of them being a great cook and preparing the most exquisite meals. While this setup might suggest an atmosphere of vulgarity, the film is in fact not (merely) that, but comical, heartfelt, and human.

La grande bouffe continues to inspire theatre productions (Toneelgroep Amsterdam, 2010), art exhibitions (Soissons, France, 2017), and, obviously, cookbooks (Ugo Tognazzi, 2017; see below). Marco Ferreri (1928-1997), the anarchist filmmaker par excellence, explained that ‘Without my cinema, there is nothing. I think through my films’. While indeed there is a strong philosophical debate at the heart of this exciting picture, we could just as well argue that Ferreri feels through his films. 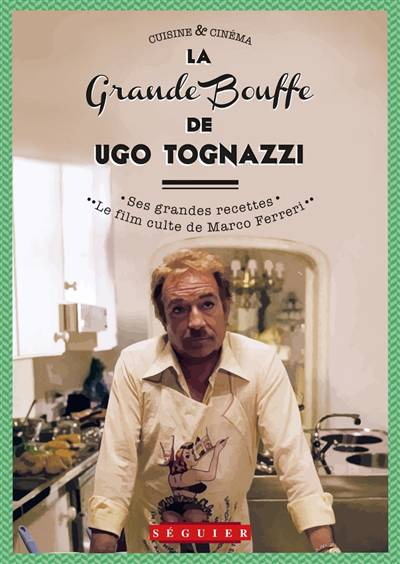